Video of the Week: Beethoven’s Game of Cat and Mouse VIDEO OF THE WEEK: Beethoven’s Game of Cat & Mouse

While our recent Videos of the Week have focused on the remarkable achievements by our #VirtualHeifetz2020 chamber ensembles in the virtual realm (see a pair of Mozart performances here and here), this week’s entry is no less astounding for its level of coordination and artistry between two remote performers. 17-year-old violinist Suet Yin (Athena) Shiu returned to study with us at the Heifetz Institute from her home in Kowloon, Hong Kong, and collaborated with faculty pianist Seonmi Lee from Seoul, South Korea to perform the opening movement from Beethoven’s Violin Sonata No. 8 in G major, Op. 30, No. 3.

This piece is part of Beethoven’s three Op. 30 sonatas, completed in 1802 while the the newly-installed Tsar Alexander 1st of Russia was visiting Vienna.  The ever-opportunistic Beethoven was not shy to seek political – or monetary – favor through flattering prominent figures with frontspiece dedications.

But it seems that in this case the efforts proved fruitless, as the Tsar departed without bestowing any rubles on Beethoven. Adding to the composer’s woes: His steadily worsening hearing. Regardless, they represent a remarkable trio of composition. 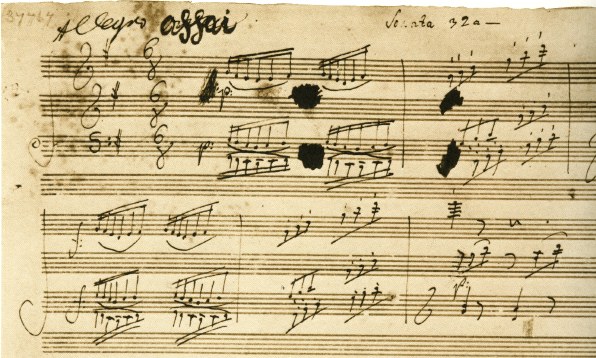 The original scores specify these works as being “for the fortepiano and a violin,” indicating that the piano is to have an equal, if not dominant, role to the violin. The young Beethoven was well known as a piano prodigy himself, but was also well practiced on the violin, having studied with Ignaz Schuppanzigh, who would later become the first violinist in the composer’s own “resident” string quartet for which he would pen some of his most memorable works (explored in depth through our Beethoven Experience series). The renowned violinist would also serve as a rehearsal and workshop partner for these sonatas, and the intimacy between the instrumentalists, the equal role of the two instruments, and the relationship between composer and performer are on full display, as Peter Sheppard Skaerved writes:

It is worth pointing out, that it seems clear that Beethoven was not in the habit of making separate copies of the violin parts for Schuppanzigh to play from. It seems that their normal practice was most that the violinist would play looking over Beethoven’s shoulder at the manuscript score on the piano music desk.  It is particularly clear from the opening of the G major sonata Op. 30 no 3 that dramatic changes have been made to the dynamics of the movement. Large, messy inkblots obscure the barely visible original ‘f’, the original dynamic given to the whirling motif of the opening. This was the obvious volume at which a movement like this should begin, particularly, notated, as it is in unison triple octaves. However, one imagines the two musicians trying it out, and then one of them, whether Beethoven or Schuppanzigh, it matters not, blurting out, ‘but what if it was piano’. From a performer’s point of view, this is a vital piece of information. Knowing that this opening is not a ‘pure’ ‘piano’, but in point of fact, a suppressed ‘forte’, lends it a completely different tenor. So given this acute precision between the two instruments, consider the challenge facing our 2020 artists Athena and Seonmi in preparing to perform this piece via the virtual collaborative process that was the hallmark of our summer programming. You need not look nor listen any further than the opening passage to appreciate the attention to detail in this collaboration, and as the piece develops, Athena likens the dialogue between the violin and piano to a hide-and-seek game between Tom and Jerry!