Video of the Week: An American in Staunton

It was an audacious notion: New York socialite Jeannette Thurber‘s desire to launch a first-ever “National Conservatory of Music,” devoted to elevating American musical artists and composers, including minorities.  And to put the novel experiment on the map, Mrs. Thurber reached across the sea to bring in one of the world’s most prominent composers to lead it: none other than Antonín Dvořák.

Dvořák’s new gig was a high-profile job, offering a lavish $15,000 annual salary, and the post would enable him to expand his wide artistic curiosities, exploring African-American and Native American music much as he had the Czech folk idioms of his homeland. For Dvořák, coming to America in 1892 was both monetarily and artistically profitable, (he penned the beloved Symphony No. 9 “From the New World” by commission of the New York Philharmonic in 1893), but was also full of demands and stress. An economic depression exhausted the assets of the young institution, and Dvořák’s salary was cut in half within a year after resettling his family across the ocean. Facing such uncertainty, an unforgiving schedule, and profound homesickness, Dvořák was desperate for a change of scenery after a year in New York.

Prior to relocating to America, Dvořák had hired Josef Jan Kovařík as his secretary. Kovařík was raised in the small Czech-speaking community of Spillville, Iowa, but had studied violin at the Prague Conservatory, where he met the composer. So when Dvořák was invited to spend the summer in far-away Spillville’s Bohemian community, he jumped at the chance. With his whole family in tow (including four children who had stayed behind in Europe), Dvořák found himself totally at ease in the pace and space of the farming community, playing the organ in church every morning and hearing “the singing of birds for the first time in eight months.” 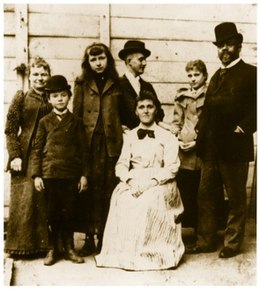 Dvořák with his family and friends in New York in 1893, the year he wrote the “American” stromg quartet. 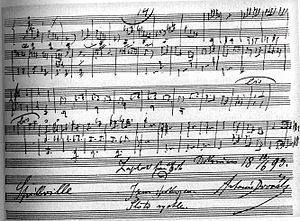 The final page of the autograph score with Dvořák’s inscription: “Finished on 10 June 1893 in Spillville. Thanks God. I’m satisfied. It went quickly.”

The new environment proved to be just the tonic for Dvořák’s compositional soul, sparking a flurry of new works, including the String Quintet in E♭ major, and the String Quartet in F major, better known as his  “American” quartet. The extent to which Dvořák directly incorporated elements of African-American and Native American music is still up for debate – some interpret the themes as directly tied to Negro spirituals or Kickapoo Indian melodies that he had heard, while others observe that the rhythms and pentatonic melodies can be heard in cultures throughout the world and are thus not necessarily uniquely “American.” Regardless, the work holds a universal appeal and is indicative of the composer’s mindset during this restorative and inspiring brief period of his career.

The first movement, Allegro ma non troppo and second movement, Lento (sometimes called “The Indian Love Call,”) are performed brilliantly by the artists of the Heifetz Ensemble in Residence, Julia Angelov and Yezu Woo, violins, Matt Cohen, viola, and Coleman Itzkoff, cello at the Great Hall of the Blackburn Inn and Conference Center in Staunton, VA.